Appears to be from a competition or muster as there are a variety of groups featured. 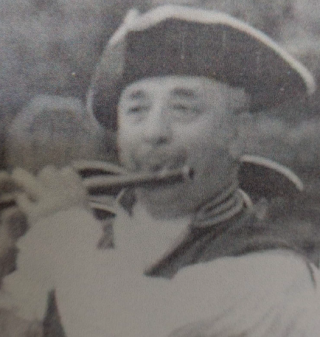 Arthur I. "Doc" Ferrante (1923-2009) was an influential fifer and fife instructor. A veteran who served in the Army Air Force during WWII, Doc Ferrante ran a dentistry practice in Newark, NJ for much of his professional career.

Ferrante was active with fife and drum corps since the late 1930s, performing and teaching with a variety of corps and participating in a number of high-profile performances. In addition, he spent over sixty years researching the martial music of early America, culminating in the publication of The Ferrante Manuscripts, a massive compendium of martial music in three volumes. Among other duties during his thirty-plus years of service to the Company of Fifers and Drummers, Doc served as Secretary and later Chairman of the Music Committee. Along with fifer Mike Chiodo and drummer Al ‘Duke’ Terreri, Ferrante was instrumental in the compiling and publication of the first two volumes of the venerable Company Books.

In February, 1965, Doc became one of the organizers of the New Jersey Colonial Militia Ancient Fife and Drum Corps along with Pete Holler, Art Mabie, Emmett Craig, Tony Clemente, Duke Terreri, and others. The corps was active until the mid-1980s.

The NJ Colonial Militia rehearsal captured on Tape F9 likely represents the corps’ repertoire during its first season, as the corps was only eight months old at the time the tape was recorded.

After cataloguing the Company’s collection of approximately sixty reel-to-reel tapes in Spring 2018, Marty Sampson, Scott Mitchell, and Kyle Forsthoff identified two tapes for digitization, which was carried out June 2018 by EverPresent of Newton, MA, funded via donations by Jack Doyle and Corinne Mitchell. The two tapes chosen were among the twelve donated to the Company by the Estate of Dr. Art Ferrante upon his passing. Both tapes were received in fair/good condition with some noticeable damage to the ends of the tape spools. The digital files were received via USB thumb drive. Kyle Forsthoff catalogued the tapes’ contents and Scott Mitchell performed rudimentary sound editing.

Tape F9 consists of members of the New Jersey Colonial Militia playing through some 52 standard tunes, the vast majority of which are included in Company Books I & II. Many of the drum parts appear to be different than the versions published in the Company Books. Tony Clemente, Art Ferrante, Pete Holler are playing Fife; Al "Duke" Terreri is the Drummer. Around halfway through the recording, Terreri begins to play street beats between each tune, and also provides impromptu drum solos at several points.

Very little editing was done except to reduce tape noise and boost the volume.