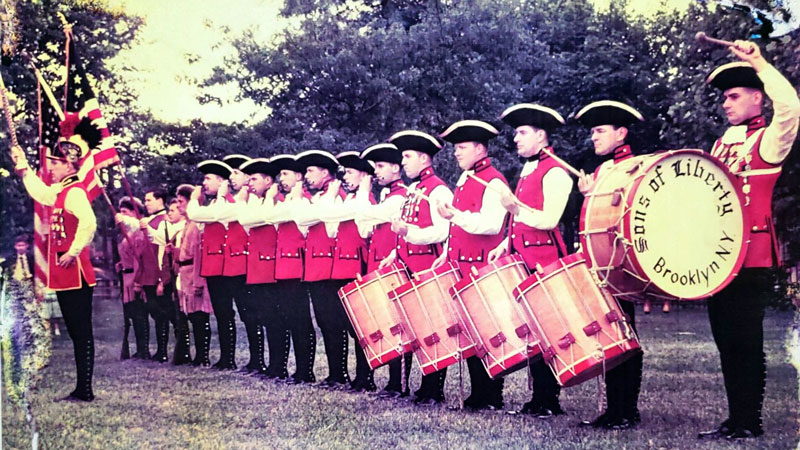 The Sons of Liberty Ancient Fife and Drum Corps was organized September 24th, 1947 in Brooklyn NY, and this is the way it happened. Jim O'Connor and I returned home from the US Navy in 1946. We both fifed together in two corps, starting at age 9. We searched for an excellent corps to play with and somehow ended up at a rehearsal of the senior drum and bugle corps of Charles W. Heisser Post No. 179. O'Connor and I played some tunes and from then on Heisser Post No. 179 was a fife, drum and bugle corps, which won many contests!

The Corps attended Hudson Valley Field Day, early in 1947, but only the fifers and the drummers came, no buglers. Their inactivity prompted the fifers and drummers to secede and form the SONS OF LIBERTY. We met in many back rooms of bars and grills for our rehearsals and we were thrown out of meeting places for making too much noise. One thing we all remember is the beer coming up by dumbwaiter to the second floor rehearsal hall. 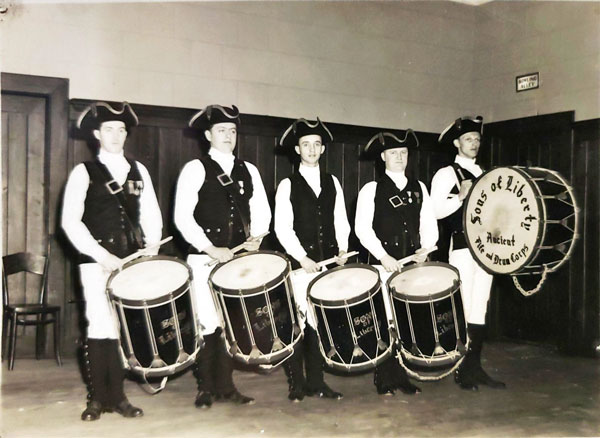 We had no money for uniforms, so we designed our own. They were made from US Navy blues - the vest and leggings. The pants were white but later changed to navy blue as the white got very dirty when in use. The wives made all the jabots, vests, leggings, and sewed on buttons and zippers. We are extremely grateful to them for their service. At this time we started to write out our Constitution and By-laws. The first drums were donated by Tom Mayn's church. They were short drums, so we glued two together to make an Ancient drum and painted them black with red rims. After all members sold the “Basket of Cheer" tickets, Larry Kron took the profits and bought our second set of drums from the Con-Edison Post. 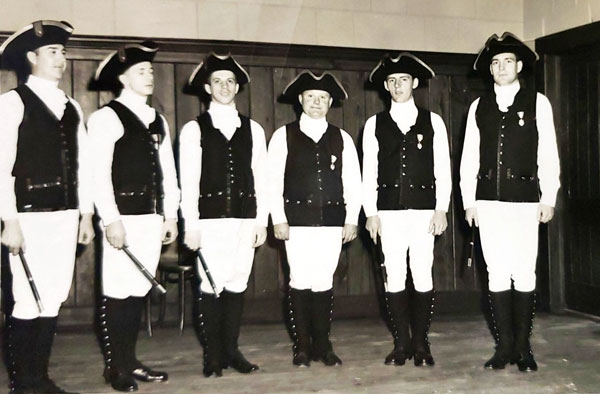 The Sons of Liberty, indoor competition, 1949.

Our first contest was Clinton Hall, Maspeth, (L.I.) NY. The judges allowed us to compete with "8" men and Tom Mayn as the drum major, and we won! We played our first medley, "Bunker Hill" [LINK], and at the 4-beat rest halfway through, the judges thought we were finished and they walked away, then we started playing again and the judges came running back! We rehearsed at Hoffman Hall, Queens, NY with no air conditioning and WOW was it hot, so we moved to Eagles Bar, East New York, Brooklyn. Larry Kron knew Father Reagan at St. Cecilia's Church, Greenpoint, Brooklyn, and had a talk with this wonderful priest. He let us use the Lyceum Hall for the rest of our years.

In 1973 Father Reagan was interviewed by The Company of Fifers & Drummers (Ed Olsen with Jay Toumey) and provided extensive information about the Sons of Liberty and the fife and drum community of his day.

Listen to the interview with Father Reagan

The Sons’ music, such as O'Connor's Q.S., Devil's Flute, Korn Likker. etc. were written by me, Chief Musician. At the time I was also arranging for the sixty-piece New York City Department of Sanitation Band. The drum parts for these tunes were written by Les Parks, graduate of Julliard School of Music, who played professionally and was an instructor and drum score composer. Parks and I cooperated in writing medleys such as Bunker Hill, Brian Bohru, Culloden Moor, Jamboree, etc. We also had a father-and-son team, Nick and George Attanasio, who traveled 225 miles round-trip from upstate Kingston, NY to attend rehearsals.

Among other places, the Sons played at Freedom Land (a Disney Land-like amusement park) in the Bronx, the Waldorf-Astoria Hotel, and the Metropolitan Opera House in New York. The Corps won well over one hundred trophies from most all of the New England states. Individual members of the corps probably hold more titles at this time (1988) than members of any other corps ever organized. These include NY City, NY State, NJ, PA, MA, CT, and RI titles, not to mention Hudson Valley, Mohawk Valley, North Eastern States titles, National Open championships, and World championships won at the 1939 World's Fair. 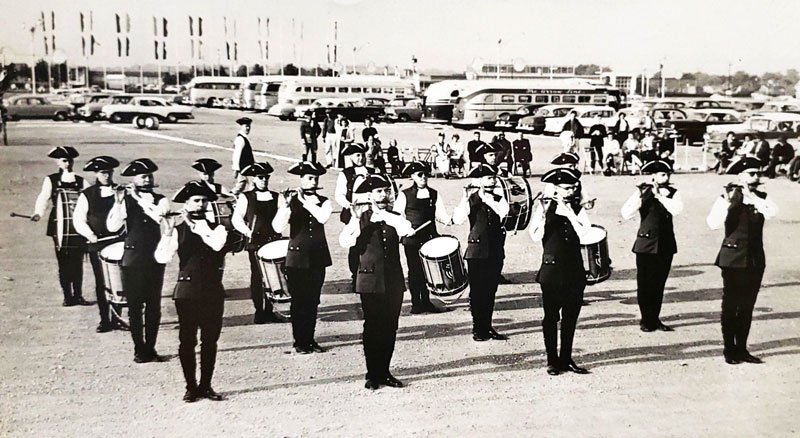 The Sons of Liberty

The Sons had quite a few members, who were extremely sincere and actually lifted the Sons to their highest and to whom we are indebted! Over the years, some 76 musicians were members of this corps, and most- if not all - became members of The Company of Fifers and Drummers. Certainly an outstanding corps, that gave great impetus to the growth and development of Ancient Fifing and Drumming, spurring on a number of other organizations through the quality of their performances and musicianship. 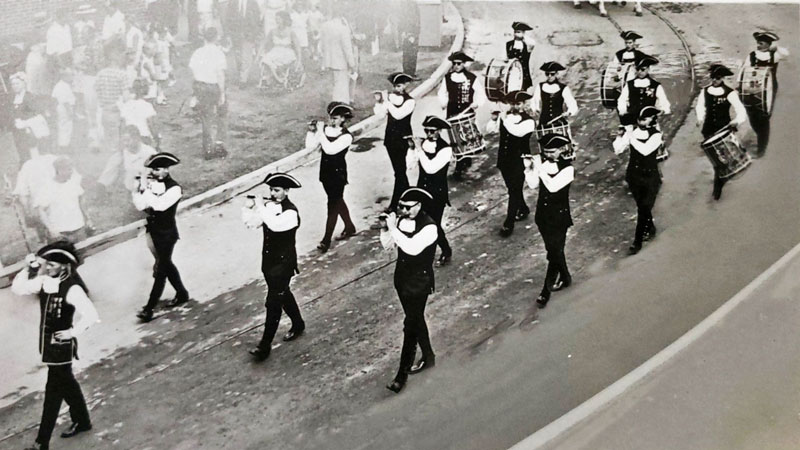 The Sons of Liberty on parade

In closing, I also want to thank Bob Thompson, Fred Novak, Ken Lemley, Larry Kron, Ken Schneider, Jim Graham, and Les Parks for their memoirs which helped me write this article. We hope after reading the history of the SONS OF LIBERTY, that even in the 21 short years of our existence, 1947-1968, it helps the planning, music, and organization of future ancient corps! 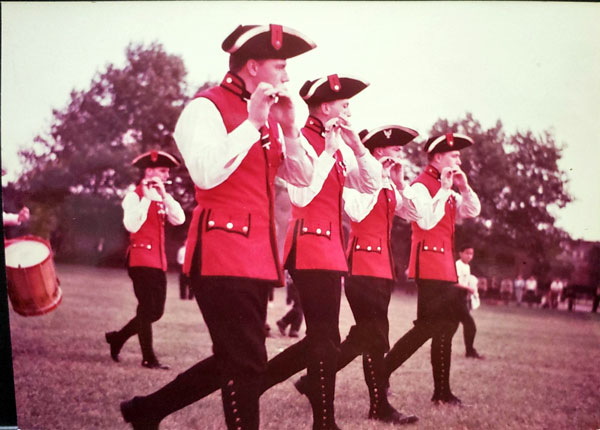 The Sons of Liberty, from Brooklyn NY 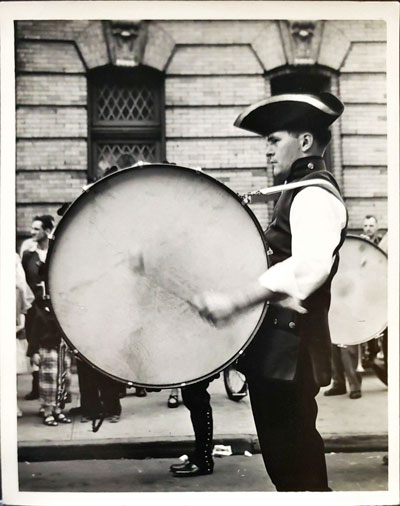 Jay Toumey performing with the Sons of Liberty

This write-up is a collation of the following articles previously printed in the Ancient Times:

These recordings of the Sons of Liberty were found on Side B of Cassette #93, a holding of the Archives of the Company of Fifers & Drummers. The recordings are found between excerpts of the Fredrick Fennell/Eastman Wind Ensemble "Spirit of '76" recording and excerpts of the Ancient Mariners' "American Fife and Drum Music" record. The contents of the tape are poorly labeled, being listed in the catalog as "Eastman Symphony w/ Mariners, Sons in 1952". It is not currently known who made the recordings or who the tape may have previously belonged to, though Ed Olsen is perhaps a likely candidate.

The recordings were made on August 2, 1952 at the Connecticut State Meet in Danbury, CT. The recordings consist of Sons medleys "Culloden Moor" and "Bunker Hill". On the tape liner, Culloden Moor is listed singularly with the specific tunes in Bunker Hill listed sequentially after.

Overall the quality of the recordings is excellent, with Fifes, Snare Drums, and Bass Drums all clearly audible. The recording of Culloden Moor starts after the beginning of the medley and picks up at measure 3 in the printed music contained in the Music of the Sons of Liberty book, available from the Company store.