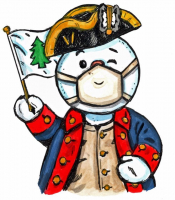 More than 20 different fife and drum corps hailing from as far away as Pennsylvania and Vermont will march along Main Street to the Town Green. Leading the musician groups will once again be the 2nd Company Governor's Foot Guard marching unit.

The marching musicians, dressed in period costumes, will play musical selections that their counterparts might have played more than 100 to 200 years ago. Alongside each corps will be parade volunteers who will carry torches to light the way. In addition to the musicians, more than 20 floats and other marching units plan to participate in this annual parade.