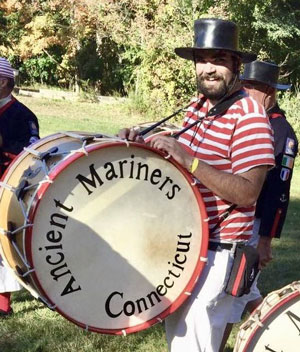 Later in his career at the age of 15, he made the jump to bass drum. After aging out of his junior corps, he joined the Ancient Mariners Fife and Drum Corps where he continues to play today. Aarin started going to camp when he was very young and after he aged out of camp, he became an intern instructor and then an instructor. 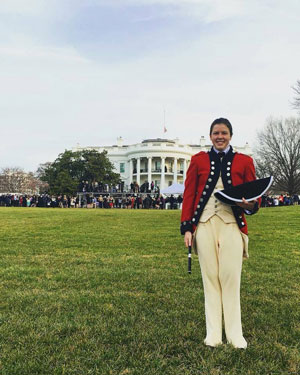 Erin Ernst is a native of Succasunna, New Jersey. Her initial interest in fife and drum arose from Civil War Reenacting. Erin began playing fife at age 9 with the Colonial Musketeers Junior Ancient Fife and Drum Corps of Hackettstown, NJ. Erin was a Northeastern Fife Solo Champion from 2008-2010, a Duet Champion in 2008 and 2010, and a Main Stand Champion from 2006-2010. She led the Corps to their victory in 2010 as the Fife Sergeant.

She has performed in the 2010 Edinburgh Military Tattoo in Sydney, Australia, the 2012 Basel Tattoo in Switzerland, and the 2018 Edinburgh Military Tattoo in Edinburgh, Scotland with the Middlesex County Volunteers Fife and Drum Corps. She attended Quinnipiac University and graduated with a Bachelor of Science in Behavioral Neuroscience. Erin has been an active member of the Grand Republic Fife and Drum Corps since 2013. 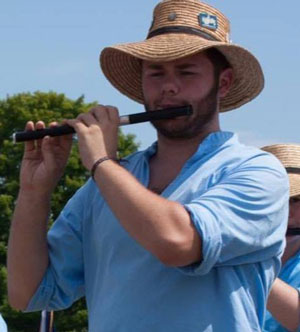 Matt began fifing in 2008 as a Civil War reenactor with the 6th New Hampshire Reg't from Peterborough, NH. Soon after he joined the Milford, NH Fife and Drum Corps where he was first introduced to the world of fife and drum and encouraged to attend Junior Camp in 2009.

​In 2011 Matt joined the Bluff Point Quahog Diggers Band and in 2015 joined the Grand Republic Fife and Drum Corps, both of which he continues to play with today.

Matt attended camp from 2009-2014 where he improved his skills as a musician and made many great friends. In 2015, Matt came back to camp as an intern and in 2017, he became an instructor.

Matt worked at the Cooperman Fife and Drum Company in Vermont from 2014 - 2017 where he worked on fifes, drums, drum sticks, and historic toys and games. 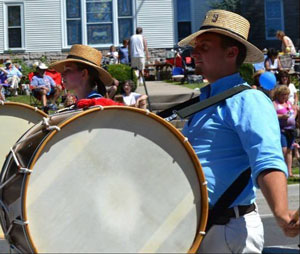 Shawn started learning to play bass as a member of Col. John Chester Fife and Drum Corps. Having the Mason family as instructors, the corps was always pushed towards excellency whether it be for competitions or parades. He attended Camp several years while in CJC, expanding his knowledge of the drum and how to maintain it.

Soon after, he was taken under the wing of Cap Corduan, the director of the camp, and joined The Bluff Point Diggers Band.

After aging out of camp, he was asked to become and intern and has been at camp ever since. Shawn feels as though Camp has broadened him both as a player and an instructor and looks forward to seeing all of the familiar faces underneath the Bass Drum Tree this summer! 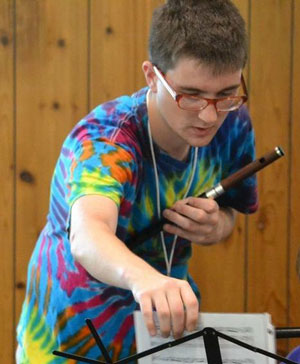 Joshua started playing the fife in 2004, at the age of eight, with the Voyageur Ancient Fife and Drum Corps of Lafayette, Indiana. While a member of the Voyageurs, he became the Fife Sergeant and shortly after, the Drum Major for the corps.

​In 2013, he joined the Theatiki Fife and Drum Corps of Bourbonnais, Illinois and performs with them while in the Midwest. He was a camper for three years from 2012-2014 in the ensemble at camp and became a Fife Intern at camp starting in 2015. While adventuring in New England in 2014, he started playing with the Bluff Point Quahog Diggers Band.

Josh has been teaching young fifers since the age of 15 in his junior corps and continues to work with members of his current corps and beyond to further the tradition of fifing and drumming. The Theatiki repertoire currently has one tune that he wrote and he continues to arrange and write music for the corps. Josh also has been playing the flute for ten years and was a section leader and soloist in groups during high school. He is currently working towards a Bachelor’s Degree, and wants to go to Optometry School afterward.

At Junior Camp, we feel strongly that everyone has a place in the fife and drum world.  All children and volunteers deserve to be welcome, safe, and supported.

At Camp, we have a zero tolerance policy for bullying and harassment.

Our differences make us stronger and better.