Frank Fancher was born in New Haven and was a student of J. Burns Moore.

According to Paul Munier:

“When he first wanted to start drumming he received no encouragement because his older brother was already drumming. He started studying with J. Burns Moore in secret. When his father found out he nailed the heel of a shoe to the sideboard in their dining room and Frank did his practicing there after that.“ [2]

Mr. Fancher started out in the Golden Legion Corps in New Haven and was associated with the following groups at different points in his career [1]: 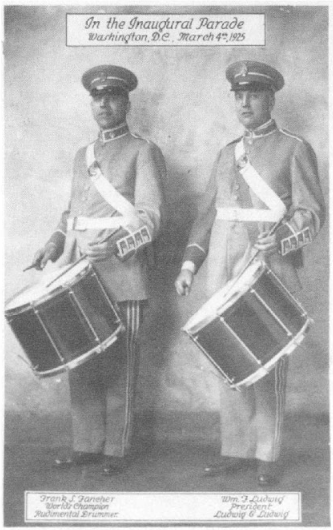 Through his career he won 183 First prizes including three national snare drumming championships:

Mr. Fancher marched with the band that led the Inaugural Parade and Inauguration of President Calvin Coolidge in 1925. Membership was offered for services rendered to the U.S. School of Music and U.S. Army band in connection with the promotion and instruction of Rudimental Drumming. [3]

His last cup was received in 1958 as a Champion Old-Time Drummer from the Military Association of Parade Drummers (MAPD).

In 1962 he was named an honorary member of the Military Association of Drum Majors in recognition of his record as a Champion Snare Drummer. [2]

Mr. Fancher held endorsements with W. F. Ludwig, Slingerland, and the Chapman Drum Company at various points in his life. [3]

After Mr. Fancher received the Cup in 1958 from the MAPD he decided to get “active” again in drumming. In 1960, at the age of approximately 75, he made a recording of his drumming. [2]

The Frank Fancher LP Record is a holding of the Archives of the Company of Fifers & Drummers. No documentation accompanies the LP, it is in a plain white dust sleeve with no markings, and the only clue to the contents is “Frank Fancher” written in pencil on the center label of the LP.

The contents of the recording are presented in their entirety, and can be grouped into three main areas: A demonstration of the 13 Essential Rudiments performed on a drum pad from slow to fast and back to slow again; a series of drum beatings performed on a field drum; and a “Self Instructor” section. Mr. Fancher speaks at several points in the recording.

The LP itself is in good condition with the exception of a large warp in the edge of the LP. The greatest impact of this is to the first track of the beatings, and causes repeated skips in the rendition of Army 2/4 and some artifacts in the recording after. The majority of the sound artifacts that lie in gaps between the notes played by the performer have been removed in the editing process, as have various pops and scratches.