Ed Classey provides a lesson in rudimental drumming at his home in Ivoryton, CT. The technique described  is documented in his drum book “The American Rudimental Method,” which is available from The Company of Fifers & Drummers store.

Mr. Classey articulates a very straightforward method descended from the teachings of Gus Moeller, which have been streamlined for ease of instruction and applicability to a wide range of drumming styles. Basic strokes are defined, and a series of traditional rudiments are demonstrated.

Drummer Matt “Sonny” Lyons demonstrates rudimental drumming in the first floor of The Company of Fifers & Drummers HQ and Museum in Ivoryton, CT.

Sonny Lyons was a student of Earl Sturtze and was well known for his power and precision.

This video, included in the Ed Classey DVD, appears to be a jam session held indoors at The Company of Fifers & Drummers Museum in Ivoryton, CT. The video indicates that this might be Jaybird Day, however the buttons and ribbons typical of that event are not present. Duke Terreri, Ed Classey, and Wally Fulton are featured throughout.

When The Company was in its formative days we sought out old familiar faces... all the old corps people who knew little better than to dedicate themselves to the successful advancement of that we, in the corps scene, knew as “The Ancients.” Naturally Eddie Classey was one of the characters to be ferreted out, for he had always been around. Therefore, as first Chairman of our Music Committee he might be considered one of the Godfathers of The Company.

Eddie’s corps credentials go back sixty years or more… to his successful days in the competitive world of New York and Connecticut Associations. As a matter of fact, he should have been awarded “National Championship” at that famous NY World’s Fair contest in 1939, except for his disqualification for having been “too young” to have competed in the senior category.

His father was a colorful old gentleman of the drum… also an “Ed”... who was an extremely proficient drum instructor. Tho’ he naturally hoped that his youthful namesake would follow in his percussive footsteps, he made no effort to unduly influence him in his choice of avocation. Years later “young” Eddie confessed to having no memory of his days learning to drum.

Eddie’s first unit was one that his father, together with his father’s drum instructor… Gus Moeller… helped organize in Mt. Vernon, NY, sponsored by Post 596 VFW. This was the corps, incidentally, that rescued the NY F&D Corps Association from the slough of inactivity it had settled into. Shortly thereafter, Gus Moeller increased the output of his “drum shop” and created the Grand Republic Drum Co.” utilizing machinery built by Eddie’s father, powered by the strong right arm of Ed’s son.

To list all his corps affilliations, (both performing and teaching), would take more space than is allowable. Suffice it to mention his last two… The Ancient Mariners, followed by the Sons of the Whiskey Rebellion.

Eddie was a rudimental drummer and a good fifer, but to his fellow drummers, his major contributions were the many fine, and fitting, drum beats that he composed.

His sense of humor was unique… he was always ready to advise and help his competitors and he left a legacy in the form of his drum book “The American Rudimental Method,” which was published by The Company.

He is survived by a brother, two sisters, three children, seven grandchildren and three great-grandchildren. We cannot hazard a guess as to Eddie’s situation in the after-world, but one thing is certain – wherever he wound up, he’s sure to still be making one hell-of-a-lot of noise. 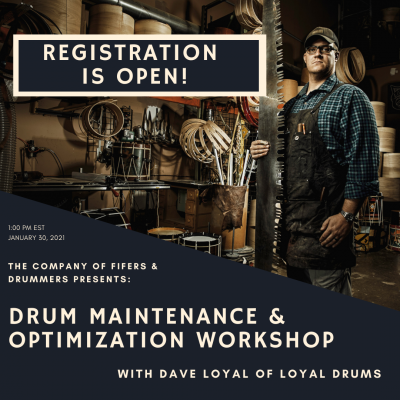