We are excited to announce that the entire catalog of The Ancient Times (The Company of Fifers & Drummers own publication) is now digitized and available for viewing and download to all visitors via The Company website. The publication, 133 issues spanning 1973 to 2014 represent a collective history of our community not written anywhere else.

We truly hope you enjoy reading our collective story.

From Our Curator, Marty Sampson 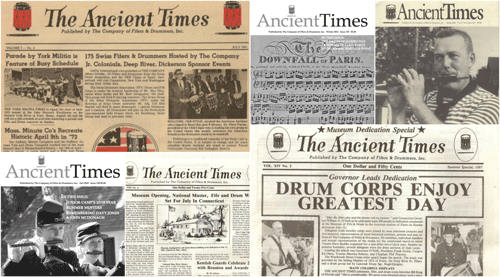 Initially, the plan was to gather all of the Ancient Times issues, sort them chronologically, and organize them into archival copies for research and study, and surplus issues for sale through the Company Store. Next, it was hoped to index the entire collection, and make the index available online as a searchable database. Eventually, it was planned to digitize each issue of the Ancient Times, and ultimately, make the collection available to researchers and other interested parties, via the internet.

As the Museum of Fife and Drum is an all-volunteer organization, there was little hope that this project would be accomplished in a timely manner. However, in the summer of 2010, a dedicated group of volunteers tackled and completed the first phase of the project: gathering, sorting, and organizing thousands of copies of the Ancient Times. Phase One was finished in July, 2010. Over the winter, I worked on indexing the issues of the Ancient Times, and have maintained it ever since.

In 2011, Bill Maling and I submitted a grant request to the Connecticut Humanities Council for funding the completion of the Ancient Times Project. Although the grant was not approved, it directed and focused our effort,  One of CCDB’s drummers, Barry Michel, volunteered to share the task of digitizing the Times, and by the Spring of 2012, that work was done. In case you are interested, it takes about one hour to digitize and prepare a single issue of the Ancient Times for archival purposes.

The Ancient Times Project remained in this condition, “done-but-not-done,” until the Company’s new website came online this Spring. Now, with this platform in-place the Ancient Times Archives could be delivered to the membership electronically and on-demand. Missing copies from the later years were filled in by Deirdre Sweeney, Ancient Times Editor, who provided these later issues in high quality, press-ready format (you can see the printer’s registration marks on some of the most recent files). Scott Mitchell completed the last mile of this project by formatting the very large scans down into web-downloadable formats (another 15 minutes per file) and creating the web site structure around this amazing resource. Today we offer them to you, the members of the Company of Fifers and Drummers, for your use.

Museum of Fife and Drum