The Company of Fifers & Drummers is proud to announce the release of a significant body of work related to drumming legend Eric Perrilloux.

Eric Perrilloux played a pivotal role in the development of rudimental drumming throughout the latter half of the 20th century. He honed his skills with the famous Charles T. Kirk Fife, Drum and Bugle corps of Brooklyn from 1937 to 1953, where he won the New York State individual snare championship five times, the North Eastern Snare championship, and other titles outside New York state. He was a central figure in the Drum and Bugle community from the mid-1950’s through 1970, performing with and instructing the New York Skyliners and the Reilly Raiders, writing percussion arrangements, and establishing judging guidelines. 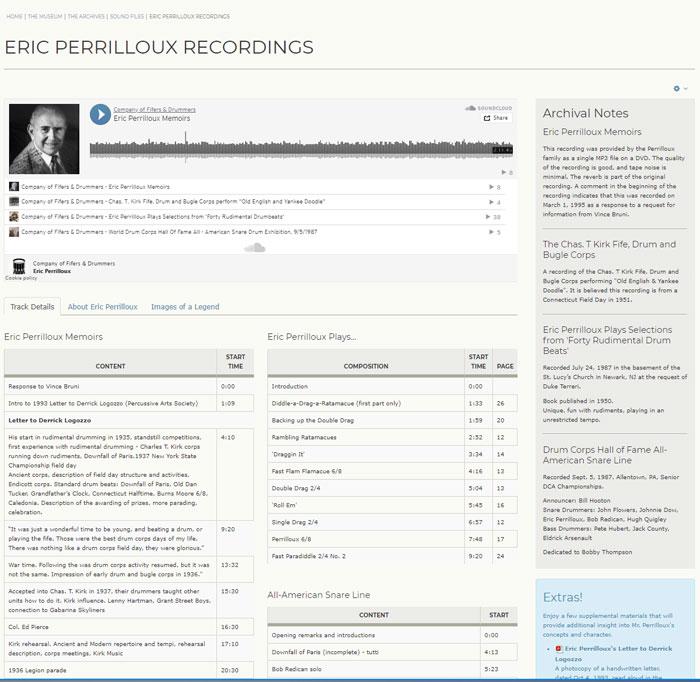 The resources are tightly packed into a single page: At the top are the audio recordings. Below are tabs that will show key audio time markers for topics of interest to researchers, another tab for a biography of Mr. Perrilloux, and a third tab for images of Mr. Perrilloux throughout his playing career.

In addition, we have included a set of extras (handwritten notes, music, and correspondences) that pertain to the recordings.

The Company of Fifers & Drummers would like to thank the Perrilloux family and Mark Holub, who have been working with the Archives committee for several years to preserve the legacy of Mr. Perrilloux. Their support has included the donation of artifacts, music, and recordings to fill out the current collection.