Leslie L. Longworth (1936-2009) was a talented artist as well as a long-time member of the Sudbury Ancients and the Company of Fifers & Drummers. 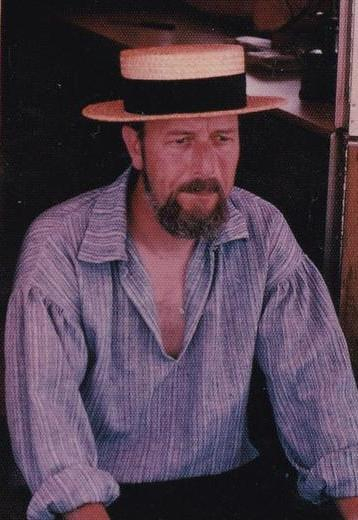 Les will long be remembered not just for his fifing, but also for the generous contribution of his many talents on behalf of the Sudbury Ancients and the Company of Fifers & Drummers, where he served on the executive Committee. His cartoons, which appeared in several issues of the Ancient times attest to his wit and humor, he captured many of the unique aspects of fifing and drumming with his cartoon "snapshots."

Les joined the Sudbury Ancients in the 1960s, and rapidly became one of their more proficient fifers, serving a term as fyfemaster. He participated in most of the bicentennial reenactments in which Sudbury took part, and will always be remembered as a superlative racconteur, guitarist, and folk singer - a one-man show as the corps gathered about the evening camp fires.

His artistic credentials are extensive. He was a graduate of the Mass College of Art and won numerous awards for his paintings. The success of the Sudbury Colonial Faire and Muster of Ancient Fifers and Drummers owes much to Les's many contributions. The labels on his home-made root beer celebrated fifing and drumming in a unique way, and those early hand written muster invitations were often stained with Les's home made red wine. For decades he created the unique medals presented to participating corps at the Sudbury Muster as well as muster buttons that have since become collector items. He also provided the design and art work for the cover for Sudbury's "Tunes of a Wayside Inn" record album.