Editor's Note: 2018 would be the 100th birthday of Alfred “Duke” Terreri, a beloved figure in our community and a huge contributor to The Company of Fifers & Drummers.

This year we will be featuring Duke and his legacy with the republication of this biography, and by celebrating his musical legacy with a concert, 100 Years of Duke: A Musical Tribute to Duke Terreri at the Company of Fifers & Drummers HQ and Museum on August 21st. 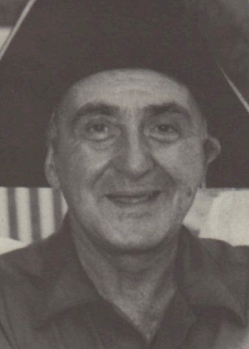 Many Ancients only knew “Duke” Terreri as the “short guy with the long drum”, an excellent rudimental drummer who was always smiling, ready to help and taking part in “jam sessions” from beginning to end, he never seemed to tire of playing.

How many know that he was barely in his teens when he was hired to play in a band - that he played with the Newark Symphonic Band from 1964 to 2000 - that he played dance music with several “Big Bands” in the 1930-1940 era - that he also performed in M&M corps?

Alfred Terreri was born in Newark, New Jersey on February 24, 1918. His interest in drumming began in the 1920s when he saw his cousins and friends perform with the St. Lucy’s Fife, Drum and Bugle Corps. By the time he was thirteen, he was hired to play drums with the Frank Richland Band, the band Frank Sinatra started with, and Duke was determined to make a name for himself in the music world. When he was barely past his teens, his mastery of the drums quickly earned him the nickname “Duke” and he was right in there in the company of the legendary Gene Krupa, Dave Tough and Buddy Rich.

He played many gigs with some of the prominent Big Bands of the time, including Gene Krupa, the Savoy All Stars, Frank Richland’s New Yorkers and the Catskills Orchestra. At one time when Gene Krupa was looking to hire a back-up drummer, thirty-four candidates, including Duke, auditioned and Duke was chosen. He refused the job because he realized that road trips would keep him away from home for long periods of time.

During the 1930s, his interest in music was expanding, he began rudimental drumming and that added to a brilliant career that spanned more than seven decades. During that time he studied music at the Pope Pius X School of Music at Manhattanville College of the Sacred Heart in Purchase, New York.

In addition to his mastery of the drum, Duke also played piano, trumpet, violin, banjo, mandolin and guitar and was a composer and arranger of music. In the 1940s Duke organized his own Big Band - Duke and Tobia Brothers All Stars - that played into the 1980s. He retired from Big Band playing in 1981. “He got tired of lugging around a drumset” says his son John.

If you did not see Dukie at a muster, on most weekends he could be found playing at some Italian festival in the tri-state area.

In 1962 he helped organize the first senior fife and drum corps in New Jersey in addition to several junior corps.

The Company of Fifers & Drummers is indeed fortunate to have had Duke as Chairman of the Music Committee for some twenty years. Under his direction, the committee assembled the music and published the popular Company music books. Duke was responsible for gathering most of the drum music, some of which would have been lost if not added to the Company music books. It took many phone calls and driving hundreds of miles to collect the drum beats, some of which had to be taken from tapes and recordings which is quite an accomplishment. If you asked Duke about a drum beat, his usual answer was “It’s in the book”.

This quiet little man had a good sense of humor and accepted graciously all the jokes about how short he was. Larry Kron made a bottom rim for Dukie’s drum with casters on it so the drum would not drag on the ground, Duke loved it!

Duke was a reverent man with a great faith in God and was never one to worry, his pet saying was “God will provide” and his attitude towards God and his fellow man was reflected at his wake and funeral Mass at St. Lucy’s Church in Newark.

Jack O’Brien said it best - “What a way to go - six priests on the Altar - one was Monsignor John Gilchrist, a fifer that Duke and Mike Chioda taught at St. Mary’s, Nutley. Then two Russian Orthodox priests arrived - long beards, robes, big crosses and high miter hats - they played bugle with “Archis” and came to see Duke - Those wonderful girls of Mother Cabrini who stood at attention at Duke’s wake, changing the guard every fifteen minutes - the entire corps of Mother Cabrini playing in front of the church - members of the Old Guard coming to see the man who started them off as drummers. - Bless you Duke - It certainly was a pleasure knowing you”.