A donation from the estate of legendary fifer Jack O'Brien, a mysterious metal fife, and a test at a jewelry store lead to the story of the election of 1896.

The Jack O’Brien Fife Collection was donated to the Company of Fifers & Drummers upon the passing of John ‘Jack’ O’Brien in 2017.[1] Jack was an avid collector of unique vintage fifes and played with a number of influential fife and drum corps in the New York/ New Jersey area throughout his life. The collection was donated to the Company with the express purpose to further the mission in whatever way possible, be it monetarily through fundraising or through research and education. The story of the Free Silver fife from Georgia is of the latter.

Upon inspection, the metal six-hole fife appears clunky and handmade. Masking tape covers a sharp edge where a cheater used to be. The fife is unusually heavy for a woodwind instrument, weighing a whopping 390 grams (13.75 ounces). When compared to another metal six hole fife of similar length, that fife only weighed 66 grams (2.33 ounces). Despite the difference in length and lack of valves, this fife more closely resembles a silver-plated Emerson flute, which weighs 451 grams (16 ounces). The exterior has patina-ed over the years to a color resembling worn steel. The words “Free Silver Bryan” are carved into the side of the fife next to an etching of a mountain range.

On Thursday November 19, 2020, the fife was tested at MRT Jewelers in East Providence, RI with a jeweler’s monocle and a silver acid test. The results indicate that the fife is in fact silver. Thus began my research into William Jennings Bryan and the Free Silver Movement in the United States.

Part I: The Free Silver Movement

Advocacy of unlimited silver coinage took hold during the latter part of the 1800s. This was known as the Free Silver Movement. An act of Congress, popularly known as the “Crime of ’73,” gave the movement momentum. This act, formally known as the Coinage Act of 1873, “abolished the right of silver bullion holders to have their metal struck to legal tender.” [2,3]  The Encyclopedia Britannica notes that “supporters of free silver included owners of silver mines in the West, farmers who believed that an expanded currency would increase the price of their crops, and debtors who hoped it would enable them to pay their debts more easily.” [4,5] Advocates of the Free Silver Movement believed in the unlimited coinage of silver at a ration of 16 to 1 - that is, 16 silver ounces to 1 gold ounce.[6] The economic depression of the 1870s gave the Free Silver Movement a political boost.

Free Silver advocates, also known as ‘silverettes’ or ‘silverites’, enjoyed a short-lived success in the 1870s and 1880s when the Bland-Allison Act restored the silver dollar as legal currency.[3] This required the U.S. treasury to purchase $2,000,000- $4,000,000 in silver from miners.[4] As farm prices collapsed in 1887, farmers demanded unlimited silver coinage. Congress responded in 1890 with the Sherman Silver Purchase Act. This act increased the US government’s monthly purchase of silver by 50%.[4]

There was a sharp reduction in the amount of gold in the US Treasury in 1893, causing a panic in the early part of the year. Conservatives, led by then-President Grover Cleveland, blamed the Sherman Act. That summer, the Sherman Act was repealed by Congress; an act of legislation that was condemned by farmers across the United States. Farmers blamed the greed of city bankers for the depression and demanded coinage in silver.[4] A champion for the farmers who felt disenfranchised by the repeal of the Sherman Act soon arose. During the 1896 Democratic National Convention in Chicago, a Nebraska Congressman named William Jennings Bryan gave a speech that is known as the “Cross of Gold” speech. History would come to know him as “Free Silver Bryan,” as he would become synonymous with the Free Silver Movement.

“No, my friends, that will never be the verdict of our people. Therefore, we care not upon what lines the battle is fought. If they say bimetallism is good, but that we cannot have it until other nations help us, we reply that, instead of having a gold standard because England has, we will restore bimetallism, and then let England have bimetallism because the United States has it. If they dare to come out in the open field and defend the gold standard as a good thing, we will fight them to the uttermost. Having behind us the producing masses of this nation and the world, supported by the commercial interests, the laboring interests, and the toilers everywhere, we will answer their demand for a gold standard by saying to them: You shall not press down upon the brow of labor this crown of thorns; you shall not crucify mankind upon a cross of gold.” [7]

This speech propelled William Jennings Bryan to fame and secured him the Democratic nomination in 1896. His oratory skills were legend. His campaign style of giving impassioned speeches to his followers became what we now call “stumping.”

The Republicans won the election with their nominee, William McKinley, in 1896. In 1900, a conservative majority in Congress passed the Gold Standard Act which set gold as the standard for US currency.[2]

William Jennings Bryan became the front-runner for the Democratic presidential nomination in 1900, despite pressure from members in his party to drop support for the Free Silver Movement. 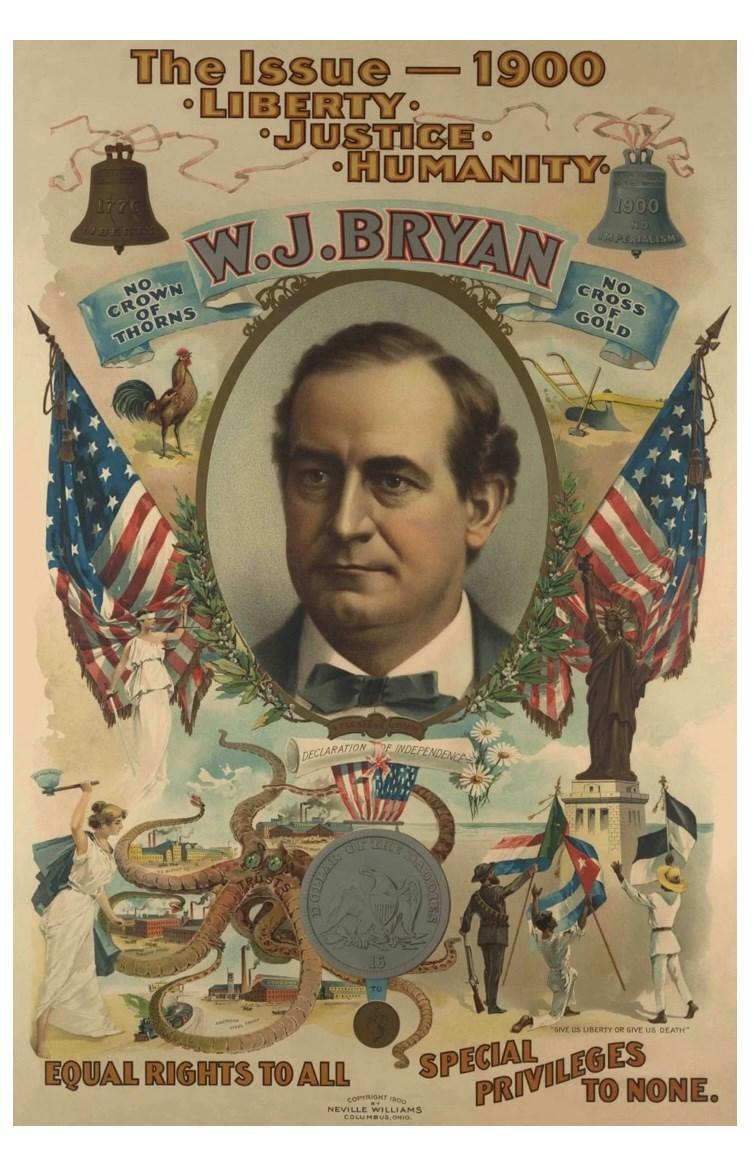 A WJ Bryan campaign poster for the 1900 election.

McKinley and the Republicans criticized the adherence to free silver and claimed credit for the economic recovery. McKinley’s campaign raised five times more than Bryan’s for campaign spending. In addition to that, they debuted a new vice-presidential candidate, who many would believe would be key to McKinley’s reelection- Theodore Roosevelt. Bryan made 546 campaign speeches for the 1900 election. Roosevelt made 673, many of which were critical of the Free Silver Movement. McKinley was reelected in 1900.[8] In 1901, McKinley was assassinated by the anarchist Leon Czolgosz and Theodore Roosevelt became president.

Bryan ran for a third time in 1908 and was unsuccessful against William Howard Taft. In 1912, William Jennings Bryan worked for the campaign and secured a nomination for Woodrow Wilson. In doing so, he secured himself a position as Secretary of State when Wilson became president.[9]

William Jennings Bryan was an avowed pacifist. He resigned his post on June 8, 1915 in protest to Wilson’s second note to Germany regarding the sinking of the RMS Lusitania. However, he remained supportive of US involvement in the Great War once it was declared.[9]

William Jennings Bryan was able to gain a following by capitalizing on the emotions of a war-torn South and impoverished Midwest. He painted the increasingly wealthy, industrialized Northeast as the enemy. Silver was more easily mined by the indebted miners and would ease their burden. The campaign rapidly caught on in the agrarian South and Midwest. In the election of 1896 against William McKinley, he carried the entire South and lower Midwest. McKinley had the Northeast and the northern Midwest. California and Oregon were split and Washington state went to Bryan. McKinley won the election despite the map looking like a landslide for Bryan. Greater population density due to industrialization on the coasts gave the election to McKinley.[10] 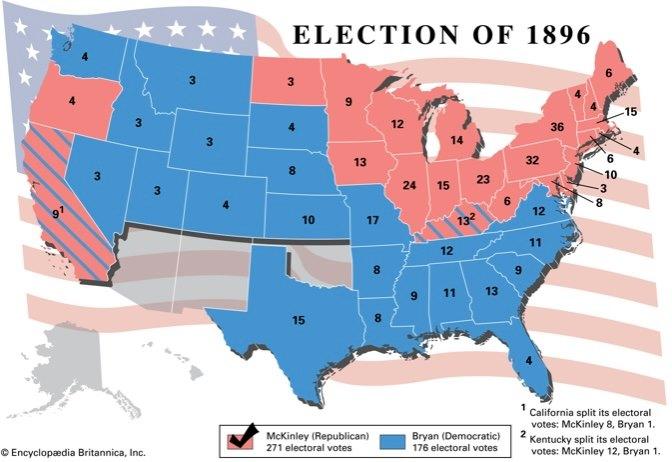 The Free Silver Movement was particularly popular in the poverty-stricken South. In a post-Reconstruction Georgia, land that was previously held by slave holders was now worked by sharecroppers. At this time, property taxes increased.[11] With the debt burden growing substantially on farmers and landowners in the South, the climate was right for a politician like William Jennings Bryan and his Free Silver Movement.

Detail of the Bryan Free Silver fife: The words “Free Silver Bryan” are carved into the side of the fife next to an etching of a mountain range.

While it is unclear if the musician who made this fife was part of a campaign band or just a follower of William Jennings Bryan, we can say that the fife itself is silver and comes from that period. Research tells us that there were several pieces of music written exclusively for William Jennings Bryan and his campaigns.[12,13,14] 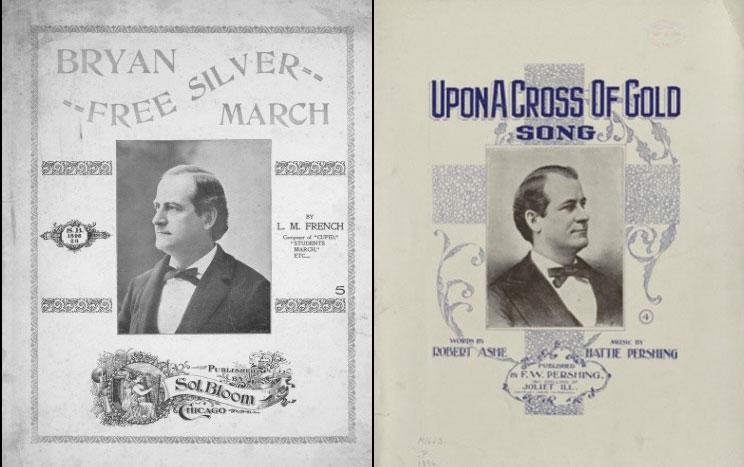 Sheet music covers for two songs written for Bryan campaigns: Free Silver March and Upon a Cross of Gold

To his contemporaries, William Jennings Bryan was a three-time unsuccessful presidential candidate. History would tell us that he was a strong orator and a successful politician. How was he successful if he did not win? He was able to unite different groups of people to vote with a single goal. He spoke to those who were disenfranchised by city elites, those who were indebted and struggling, and those who were still lacking the ability to vote. Yes, he was a voice for suffragettes. The Free Silver Movement may not have replaced the gold standard, but his lasting legacy in populist politics has shaped presidential campaigns to this day.[15]