Sonny Lyons was a student of Earl Sturtze and was extremely well regarded by his peers for his power and precision. 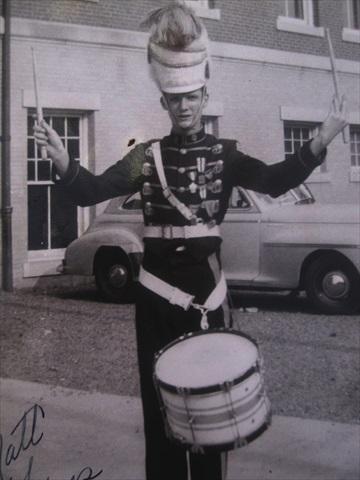 Sonny attended St. Francis Grammar School and participated in both the Jr. & Sr. Drum Corps, winning many individual drumming championships and achieving national and international recognition in Rudimental Snare Drumming. He served his country in the Army during WWII and upon returning received his diploma from Hillhouse High School and graduated from Quinnipiac University. He joined the Connecticut Yankees Drum and Bugle Corps in Stratford, CT as Drum Sergeant, competing in the American Legion M & M Circuit winning National Championships. While still in the reserves, he was activated for the Korean Conflict serving in the Navy aboard USS Samuel B. Roberts DD-823 in Europe Atlantic Ocean and the Mediterranean Sea. Upon his discharge, Sonny joined the New Haven Fire Department in 1952, rising to the rank of Deputy Chief, Director of Training and Emergency Communication.

While in the NHFD, he was a key participant in implementing CMED and the 911 Emergency Communications for New Haven County and received numerous Commendations from the Fire Commissioners. Sonny retired from the NHFD after 41 years and moved with his wife from New Haven to Branford.

He played for over 30 years with the Ancient Mariners Fife & Drum Corps, performing locally and internationally. His passion and 1st love was Rudimental Drumming and Music. He performed with many Drum Corps, Military Service Bands, and a Country Music group throughout the US and on many occasions in Europe, Southern Ireland, and Switzerland; in unique venues in the US, i.e., Madison Square Garden for Elizabeth Taylor's wedding, 200th Anniversary of the Liberty Bell in Philly, and American Legion National Conventions at the Rose and Orange Bowls.

Sonny last played with the Sons of the Whiskey Rebellion with his son and many of his close drum corps friends. A unique experience for the Whiskey Boys was their performance in KY at the personal invitation of Booker Noe, Master Distiller emeritus of Jim Beam and Grandson. He was a member of The Company of Fifers & Drummers, and as Vice President introduced the "Jaybirds" organization to honor Drum Corps "Old Timers."

Additional Videos in this Series

This video is one of the five topics covered by the Ed Classey DVD. The remaing videos from this DVD will be published in weekly installments and consists of:

In our second of five videos from the Ed Classey DVD, Ed Classey provides a lesson in rudimental drumming at his home in Ivoryton, CT. Mr. Classey articulates a very straightforward method descended from the teachings of Gus Moeller, which have been streamlined for ease of instruction and applicability to a wide range of drumming styles. Basic strokes are defined, and a series of traditional rudiments are demonstrated.

This video, included in the Ed Classey DVD, appears to be a jam session held indoors at The Company of Fifers & Drummers Museum in Ivoryton, CT. The video indicates that this might be Jaybird Day, however the buttons and ribbons typical of that event are not present. Duke Terreri and Ed Classey are featured throughout, as is Wally Fulton.