April 19th, 1775 marks a pivotal point in American History. Today, April 17th 2018, being the legal holiday commemorating those events, the annual re-creation of the Isaac Davis Trail march to Concord Massachusetts was held.

On that original date in 1775 members of the Acton Militia left their homes and families in the name of freedom and met the British Army that was coming to take away their powder and arms, in Concord. I am sure the official chronicles read something like: 'The Acton Militia left in the wee hours of the morning on a beautiful April Spring Day...’. My modern day experience was not so much. However, in the wee hours of the morning (4:30) seven members of the Bristol County Fifes and Drums (BCFD) assembled at the beginning of the Isaac Davis Trail with the Acton Militia. It was rain, sleet, snow and everything else the miserable New England weather could throw at us. When I signed up for this event there was no weather forecast available but I thought it would be a fun thing to try along with some of my friends from the BCFD and also a good opportunity to test my stamina.

We (the BCFD) were to help provide field music for the 7 mile march along the original route (well, sort of) from Acton to Concord for the assembled militia troops. As the date got closer and the dismal weather forecasts emerged we were starting to get a little concerned and thoughts of; 'maybe we shouldn't do this', were starting to well up in our heads. Then news came that we were going to have a guest musician with us. We were told his name was John and he was from Alaska. He and his family had signed up with the Make-a-Wish Foundation, not to go to Disney or some other such place. You see, John was fascinated with American History and the founding of our country and his wish was to participate in a reenactment of the events that started the American Revolution. He had been taking drum lessons and wanted to participate in the official events in Massachusetts. The Acton Minutemen with this event provided him that opportunity and we at the BCFD were told he would be marching with us. With that news our concerns immediately faded and without a second thought of the weather, we were all in. 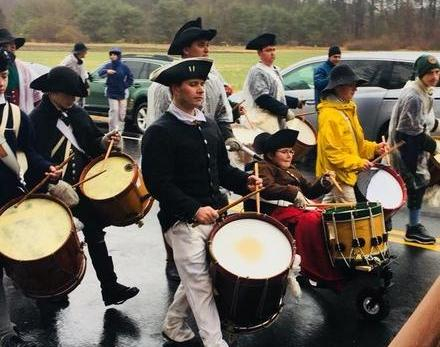 John proudly "marched" joining us for the last mile-and-a-half playing his drum to the tunes he knew. He endured the cold rain and wind, proudly displaying his new Colonial uniform. It was quite an emotional experience to see the strength and determination in this young man. Now this event almost didn't happen. Because of the weather the local authorities thought everything had been called off (only the formal parade had been) and didn't have the personnel ready to protect the march. They had already told the Scouts they were not going to be able to do the entire route. But, the leader of the Acton Minutemen insisted that it go on as planned citing John’s story. So the town, who were quite concerned with our safety but learning of the importance of carrying on, quickly assembled officers and town employees to make sure it happened.

At the Concord visitors center after the march John was honored with some special remembrance items of his part in the day’s events. He was then promoted to lead all the troops, counting in the hundreds, from the Concord Visitors Center down to the bridge where the original battle occurred. Although the weather and conditions were too poor to complete the traditional reenactment of the event John commanded the troops, British and American, in a mass 3 volley musket salute from the rails of the Concord Bridge. After a brief ceremony commemorating the events of April 19th, 1775 at the obelisk, John then returned through the assembled troops lining each side of the Concord Bridge and with a huge smile passed in review with unending Huzzahs!!!! It was a sight to see and an honor for everyone in attendance.

As for me, yes I successfully completed the trek, how could I not? This had been on my bucket list and with the power of his strength, determination and patriotism John wasn't the only one who had a wish come true that day.

John McConnell, we at the Bristol County Fifes and Drums wish you the best.  From all of us; “Cheers to Conquering!”