The Company of Fifers & Drummers is honored to have the following music, written and arranged by John Benoit, available for purchase. This music represents the life’s work of John Benoit, and all proceeds from the sale of these books are being donated to The Company. 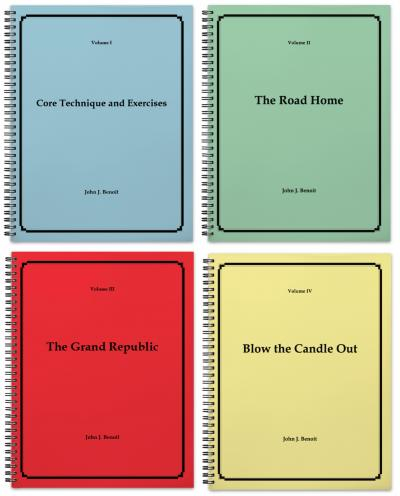 John Benoit began fifing in the early 1960's with The 15th Mass Regt. / Capt. James Buxton Fife & Drum Corps of Uxbridge, MA, under the instruction of the venerable Benjamin P. Emerick. In 1972 John was accepted as a fifer in The Old Guard Fife and Drum Corps. Upon his discharge in 1975, he went on to perform with The American Fife Ensemble and The Ancient Mariners, and also began instructing and arranging music for The Connecticut Blues.

In 1984 John established the ensemble "Fife in the Fast Lane" with long-time musical collaborator, John Ciaglia. In 2005 he co-founded The Grand Republic Fife and Drum Corps with drummer / arranger Scott Mitchell, after playing together for several years with The Sons of the Whiskey Rebellion alongside such drum corps legends as Ed Olsen, Ken Lemley, Matt Lyons, and the McGowan brothers (Frank, Dennis and Bobby).

In addition to The Blues, Fife in the Fast Lane, and The Grand Republic, John has written and arranged music for several contemporary fife and drum corps. His compositions and arrangements have been played and/or recorded by many diverse units, including: The Old Guard, Menotomy, The Middlesex County Volunteers, The Kentish Guards, Tippecanoe, Museumsgruppe (Basel, Switzerland), Grainfield, Fife Alive, The Geese Eaters, The Regulators, Colonel John Chester, The Company of Fifers and Drummers Junior Fife and Drum Camp, and others.

John has performed on the following recordings: The Old Guard Fife & Drum Corps (1975); "Music of the American Revolution: The Birth of Liberty" (American Fife Ensemble on New World Records); "Poor Wretches Are We" (Fife in the Fast Lane); and, "The Road to Folly" (John Benoit, John Ciaglia, Xenia Fünfschilling and Scott Mitchell). Selections from "Poor Wretches Are We" can be heard on the soundtrack to "Rediscovering George Washington", a documentary that first aired on PBS in 2002.

In addition to American fife and drum music, John has composed several marches for the Basel piccolo, which have been performed by the Museumsgruppe at the prestigious Muzeumkonzartli in Basel. At least one such composition, Festival Marsch, is played both for juried competitions and on the street by several cliques during Basel’s annual carnival celebration, Fasnacht.

John is perhaps proudest of his contributions to the continuing education of today’s young musicians through development of instructional materials, providing individual and ensemble instruction, and his past participation in the Company of Fifers and Drummers annual Junior Fife and Drum Camp. Though retired from active participation in fife and drum corps life, he continues to write, arrange, and teach upon request.

All books are available individually or can be purchased as a set for $95. Orders will begin shipping starting in February!

But wait, there’s more! We also have a limited supply (40 copies) of the “Poor Wretches are We” CD by Fife in the Fast Lane for $15 each.