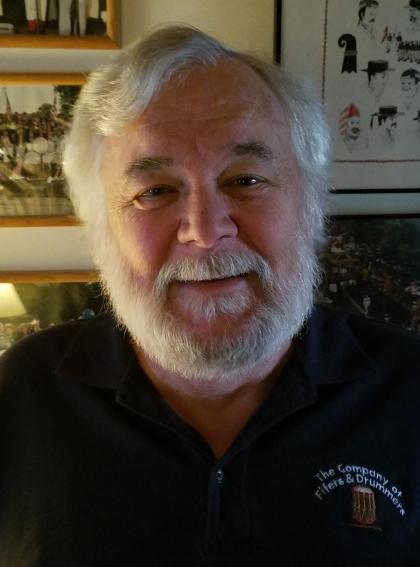 After President John Hanewich passed away unexpectedly in early 2015, I took over as acting president with the aid of 1st Vice President Mark Logsdon. With The Company elections looming near in April, I felt that some continuity was needed and put my name on the ballot. To say the least, the new Executive Committee began its tenure on rocky ground. As time went by, we found our groove and began to progress.

I was Commodore and Business Manager of the Ancient Mariners for many years, but it did not fully prepare me for the ins and outs of running an international organization that is The Company of Fifers & Drummers. After much thought and consideration, I realized that we needed more expertise in certain areas of administering The Company that were out of my league. As President and understanding it, it was my job to do just that. So, without further ado I surrounded myself with not only the existing members of the Executive Committee and their realm of knowledge, but others who I knew would be of tremendous help. That move proved to be the right one. Our direction stabilized and we were off and running.

We began with establishing a new and very interactive website that offers a ton of pertinent information, as well as areas to increase membership. It also contains the newsletter, help with running a muster, establishing a new corps, etc., etc. If you have not seen it, go to companyoffifeanddrum.org and check it out.

Next was correcting a problem that was the proverbial albatross around the company’s neck. The bottom floor of the headquarters and museum building suffered a lot of damage during torrential rains that flooded the whole area back in 2010.  After cleanup, the effect of the damage was gradually beginning to rear its ugly head. Thinking that the floor needed replacing and we would be good to go was far from reality. After the old floor was removed, the depth of the damage was realized. We ended up gutting much of the area and starting all over again. Through the graces of many volunteers and donations from you, the membership, we now have a sparkling new club room. The Sturtze Room and office are still a work in progress.

During all this many other projects were being attacked. The roof on the building was replaced as well as repairing and stabilizing the heating and air conditioning system. This coming spring and summer we will see the building’s exterior painted and overgrown areas of the grounds being reclaimed by removing a lot of brush.

The entire drum collection was researched and cataloged as well as continuing work of organizing the museums archives. This is a huge project that is still ongoing. You can visit the archives room by appointment and look at your corps’ file. A lot of history and pictures are contained there.

Add to that the development of a three-year strategic plan, re-launching and maintaining the docents committee, streamlining other existing committees and filling vacancies on the Board of Trustees and Endowment Fund Custodians. Most importantly was bringing the companies financials in line with the aid of budgets, grant writing, and an active fundraiser which is in full swing right now.

There is so much more that I could go on and on. This is all due to initiative and hard work by your Executive Committee and others. I could name names, but that would be another whole page. What I can say is, that you and I owe them a vote of thanks and a pat on the back, and even that is not enough. They are all volunteers and do this out of love for the music and the entire fife and drum community.

In closing, as I prepare to step down as president, I personally want to thank all of you for whatever part you have played in the accomplishments and ongoing progress that makes this organization what it is today. Our mission is to protect and preserve the history of fife and drum and the education there of. Remember, we are all a part of that history and there is still so much more to be made. It is up to all of us to make sure that future generations of fifers and drummers, will have all that we hold dear available for all to see and learn from. I have no doubt that it will continue.

It is time for the next generation to step up and be counted. As I look at those around me that are excited every day at the prospects of making The Company an even better organization, I know deep in my heart that its future is in good hands. Again, thank you all so much for your help and good faith.

In the Ancient Spirit,

The Company of Fifers & Drummers