Alan D. Cavallo, 53 of Brookfield CT, passed away on Tuesday January 14, 2020. He was the husband of Catherine (Cuccia) Cavallo. 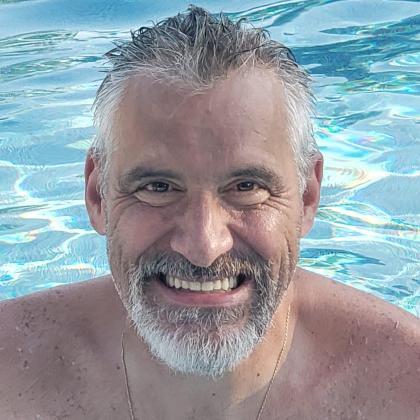 Alan was born in Danbury, CT, the son of Elinor Cavallo James and the late Edward Cavallo Sr. He attended the Brookfield Schools, was the proud owner of ADC Landscaping and had an exceptional work ethic. He most recently worked at New Fairfield Public Schools.

In addition to his wife of 19 years and his mother, he will be sadly missed by his siblings: Edward Cavallo Jr., Robert Cavallo Sr., Ellen Cavallo Buccitti, her husband David, and Izzy Cavallo. His enormous extended family includes: his in-laws Deborah and Gaspare Cuccia Sr.; brothers and sister in law Joseph, Dominick, Gus, Nicholas, and Deborah and their loving wives & husbands; and 25 nieces and nephews, who were in every sense his children, to which he brought joy and endless laughter that will be cherished forever.

Alan was a drum corps “lifer” beginning at age nine, playing trumpet and eventually marching with his dad and brothers with the Danbury Drum Corps as an exceptional baritone horn player. He became an accomplished rudimental bass drummer with The Regulators Fife & Drum Corps. His success should be an inspiration to every musician and drum corps enthusiast!

He also enjoyed judging parades with the Tri-State Music Association. This past Saturday he attended Drumming for our Veterans and had a GREAT time watching & talking drum corps.

Alan was an inspirational guy. He was a pillar of strength even throughout his health journey as he waited for a heart transplant at his young age. He received exceptional care at Yale New Haven Hospital. His doctors described him as the "perfect patient" and his health success was attributed to his walking over 10,000 steps a day at his job. He defied the logic of his health situation & always pushed thru with humor & perseverance.

He will always be remembered for his quick wit, clever sayings, inappropriate comments, cherished smile, silliness, laughter, amazing hugs, drum corps, and long, loud games of Parcheesi. He loved drumming and the trips that came along with it, the baritone, his shiny red truck and his kitty cat. Alan’s love of landscaping, planting & picking gardens, NASCAR and camping will live on through all his nieces and nephews.

Alan will forever be known as a man with a sharp tongue and big, loving heart. He had an enormous love for family and friends. We will all have stories that will bring a smile to our face in the days and years to come.

Rest Easy Alan, you will be missed each and every day, we love you!

Friends are kindly asked to omit flowers. Contributions in Alan’s memory may be made to a Memorial Fund by visiting AlanCavallo.com for details.

For further information or to express your condolences on line, go to www.thegreenfuneralhome.com