Bishop Robert Atwell, Jr (Bob), 85, of Durham, passed away on June 18th, 2018 surrounded by family. He was born to the late Bishop R. Atwell and Mabel (Trischman) Atwell on May 26th, 1933. Bob attended Durham Public Schools and lived in town all his life. 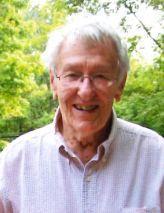 Bob was a lifelong drummer, starting around the time he was in first grade, following in the footsteps of his father and grandfather. The first drum corps he joined was associated with the Durham Vol. Fire Dept. He was a drummer in Henry Bugai’s polka band, which is how he met his wife Margaret (Steffman) Atwell, whom he married on September 6th, 1952. He joined the Chester Fife and Drum Corps in 1953, where Peg was also by his side as a fifer, until leaving around 1976. Bob founded the Coginchaug Ancients Fife and Drum Corps in 1956, making all their drums in the early days when first starting out.

He was a drum instructor, mentor, and drum maker and repairer for most of his life. It is estimated that he made and repaired well over 200 drums for local and out of state corps, all out of his Durham home. Both of Bob and Peg’s children, Bob and Jody, were involved with drum corps from an early age. Drum corps led to many wonderful opportunities to travel all over Connecticut and the United States, and even to Ireland and Switzerland. In addition to his work with drum corps, Bob volunteered with the Durham Fair and had attended every fair since his birth in 1933.

Bob also volunteered with the Durham Historical Society and served on the Durham Cemetery Company’s board. Bob was employed by the Durham Manufacturing Company from 1949 until his retirement as their shipping supervisor in 1995. Bob’s love for his hometown was apparent to anyone who talked to him about its history, and his many stories and anecdotes about the town and its people will be missed.

During his final weeks at home he was joined one evening by several of his previous students, including his two children, for a final drumming session, where he played through all 10 songs on his grandfather’s drum.

Visiting hours will be held at the Doolittle Funeral Home, 14 Old Church Street, Middletown on Saturday, June 23rd from 1-2 pm, with a funeral service following at 2 pm. A reception for family and friends will be held at the Fellowship Hall of the United Churches of Durham (Main Street Durham) following the funeral.  In lieu of flowers, memorial contributions in Bob’s name can be made to the Durham Historical Society at P.O. Box 345, Durham, CT 06422.

Messages of condolence may be sent to the family at www.doolittlefuneralservice.com.