Dave King, age 58, of Bradley,IL passed away Sunday, September 17, 2017 surrounded by his loving family. Dave, the son of Ray and Gloria (Gress) King was born at St. Mary’s Hospital in Kankakee, IL on March 1, 1959. He married Cathy Hart on November 3, 1979 at St. Joseph Catholic Church in Bradley. 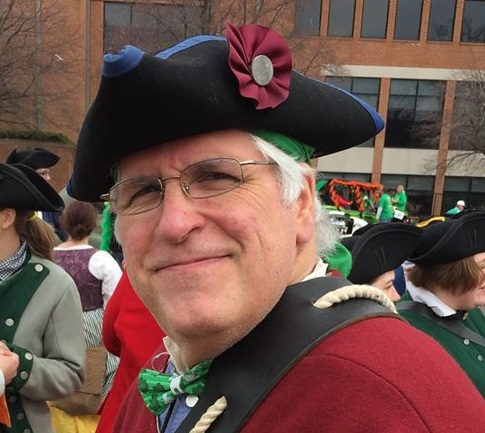 Dave possessed a passion for life and the people in his life, but his greatest love was music! As co-owner of King Music in Bradley, Dave instilled his passion for music into the lives of countless others in this community and beyond. Dave will long be remembered as an accomplished musician who was instrumental in performing with The Swing Kings, The King’s of Dixie, The Dave King Trio, Kankakee Valley Wind Ensemble, the Theatiki Fife and Drum Corps (which he founded) as well as many others.

This local Paul Bunyan loved life! Dave had many interests outside of his music. He fervently pursued his interest in preserving local history, genealogy, researching Petite Canada, spear-heading the Van Meter Cemetery restoration, and countless other activities. He zestfully researched family genealogy. The King home was always a flutter of activity with parties, games, gardening and sharing of his passions with the “everyone is welcome attitude” where the lines between family and friends blurred beyond distinction.

The history of the Theatiki Fife and Drum Corps, as told by David King, the "Founding Father"

My love of history and genealogy began in my early teens. I started reenacting around 1990 when our local historical society prepared for a special event in which I was asked to form a Voyageur choir to sing old French Canadian tunes. Although the group did only the one performance, I was a marked man in my local re-enacting circles as a person who "should" do music at reenactments. So, for 7 or 8 years, fellow reenactors kept prodding me to start a musical group of some sort. After a while I finally decided on a fife and drum corps, but never thought I could learn to get a sound on the fife let alone talk others into learning the instrument. At some point, I ran into Tracy Ahrens. She too had an interest in fife (she already played flute) and participating in some sort of performing group. Not much came from the first discussions, but both of us, independently began to think about the venture and acquire information about fifes.

In the meantime, I convinced my son Joe and his classmate Heather Crooks (fifer-and flute player) to play at Theatiki 2001. So, with Dave and Heather on fife, Joe on Snare drum, and my wife Cathy, playing a homemade Bodhran performed during the opening ceremonies each day at the event. It was an odd sounding and looking entourage, but we did get a number of favorable comments. During the event, I ran into Tracy Ahrens a second time, who had just purchased her first fife and we re-connected about starting the corps. A few more months went by as I researched and found music. It was during this time that I was the Entertainment Chairman for our local event (The Gathering on the Theatiki) that I made contact with Terry Hart, director of the Voyageurs Ancients. When I told him that I was thinking about starting a fife and drum group but didn't know what the heck I was doing, he invited me down to Lafayette to witness a practice and talk with their board of directors and volunteers about some of the business aspects of the corps. Terry was very optimistic about helping me in any way he could. It was his encouragement that gave me that final push to get the ball rolling. In the spring of 2002, I started my recruiting tactics through connections I have at the music store. You would not believe how many people said, "That sounds like fun, sign me up." Our first rehearsals were in late April, 2002.

Between April and June, besides learning tunes, we also had to decide on "what to wear" and "who we were". We decided first to go "civilian" and have each member wear his/her own period clothing and have each of us have a different persona and look. We thought that would work great for reenactments, but not so much for parades and more ceremonial functions. We were afraid the general public just wouldn't "get it" and think we were the 18th century version of the Village People! We finally decided on looking historically accurate, but not trying to portray an actual historically documented unit or regiment. We also didn't know a thing about fife and drum, nor the other groups that were out there besides the Voyageurs, Tippecanoe and the 42nd. None of us had experience in fife and drum nor their traditions. I contacted Jan from Ghost Forge and ordered pants and stockings and my wife Cathy began making work shirts and waistcoats. By the time of our first real performance on June 14 2002, we had work shirts, pants, stockings, headscarves and Cooperman maple fifes.

Yes, maple fifes. I have been a musician longer than I've been anything else and I know to make great music you have to invest in a great instrument. The only problem was, I didn't know what a good fife was all about and didn't even know how to tell a good one from a bad one. But what I did know was we had to start with something and then learn about which fife to get. So I purchased about 9 of those maple masterpieces and started tweaking them in my instrument repair shop. I smoothed out the boar, beveled the finger holes, applied bore oil and tested each one. This lengthy progress made a great improvement at the time.

By the end of June, we had our waistcoats and debuted them in our local Friendship Festival Parade. By July we had our first tricorn hats for our host reenactment The Gathering on The Theatiki. Our beginnings were very grass roots and humble, slowly making adjustments and improvements as we learned more about the fife and drum world. Terry Hart and the Voyageurs, who I booked to perform at that Gathering on the Theatiki gave our little group a fantastic pep talk and congratulated us on our first reenactment. He really put some air into our little balloon and he told us about FREEZER JAM.

We attended our first Freezer Jam in early 2003 in Sterling Heights, Michigan. We traveled 6 hours through a blizzard and slept on a gym floor. This was our first exposure to any other fife and drum corps (besides Voyageurs) and we were in for a delightful surprise. We met the most fantastic and gracious people, who were very encouraging and willing to share information about anything and everything we needed... including fifes. As bad as our fifes were, not one person made derogatory comments about them (to our face, that is)but did offer to let us try their fife. All day at the conference, I bet every one of our members were approached by three little words..."try my fife". It's sort of funny now, but God knows how many germs were spread around that day. We learned a lot that first Freezer Jam about who we were, how we fit in, what we knew, what we didn't and learned that we were not alone. We had been welcomed into a thriving community of Midwestern fifers and drummers.

Every Corps can almost recite verbatim, the sentiments of what Dave talked about in this narrative. Every Corps has similar stories of how they began. Theatiki has become a strong and innovative Fife and Drum Corps, and have hosted Freezer Jam in beautiful Bourbonnais, Illinois. They will be doing hosting duties again on February 3rd, 2018, when they will, once again, host Freezer Jam. Dave became a lifelong student of the hobby and also became a leader within the Midwest. It was through his larger than life personality (and his innate aversion to the word “NO”) that the Midwest Corps helped him create “Musick of the Old Northwest”. Each Corps was asked to submit music to be compiled and published in book form. This fantastic idea was spearheaded and sometimes pushed by Dave and was supported by his beloved Theatiki Fife and Drum Corps and the existing fife and drum corps of the Midwest that were in existence at that time.

Dave’s love for fifing and drumming wasn’t just confined to the Midwest, however. Shortly after meeting Dave and the group, Mark Logsdon, then a Company Representative, sat with Dave and talked about the Company of Fifers and Drummers. Not long after, Theatiki was the Company’s newest member Corps. Dave worked hard to bring the group out to Deep River as often as possible. On his first trip out, he was blown away when the Corps visited the Museum of Fife and Drum. That trip deepened his commitment to the art form. It was Dave King, through his Music Store, King Music, that donated the Fender sound system that is used at the Company Hall.

Sadly, Dave became ill on the Saturday evening of Deep River, while relaxing after a day of performing and jamming. It was the beginning of the end. The man who was larger than life, remains so in our minds and memories. The members of Theatiki remain dedicated to the legacy of Dave’s vision. He is sorely missed by everyone in the Midwest family of Fifing and Drumming.