Glenn McCausland, age 75, died peacefully at his home in Glenmoore, Pennsylvania on December 21, 2017 with his family around him. 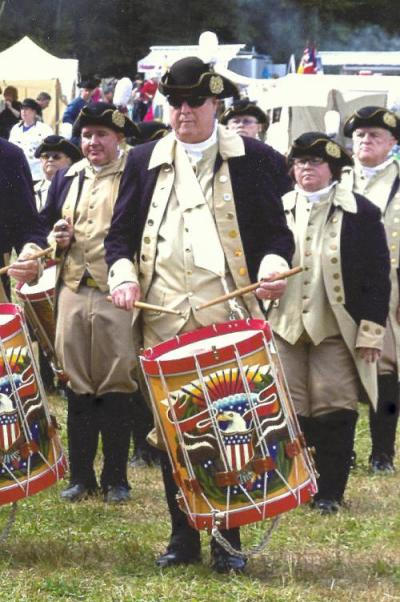 Glenn McAusland playing with LancraftGlenn fought a year and a half battle with a glioblastoma brain tumor. He is survived by his loving wife of 31 years, Kristen, daughter Kelsey, son Kyle, brother Drew and sister Gail. Glenn was a veterinarian (V.M.D), establishing his clinic in Lionville, PA, having graduated from Penn State University and the University of Pennsylvania School of Veterinary Medicine. Glenn was a veteran of the U.S. Army, serving at a 1st Lieutenant in the Chemical Corps. Glenn’s sports love was tennis... and Nittany Lions football.

Glenn began drumming at Glen-Nor High School in Glenolden, PA, later playing in the Penn State University Marching Band… the famous BLUE BAND. In 1996 he joined Camp Chase Fifes and Drums, Columbus, Ohio then joining The Lancraft Fife and Drum Corps of North Haven, CT in 2000. He also enjoyed doing “pick up gigs” with corps like Monumental City, Mifflin Guard and groups in the Philadelphia area. Glenn performed in several drummer’s associations including the United States Association of Rudimental Drummers and its predecessor organization, The American Patriots Rudimental Drum Club. Glenn was a proud member of the NARD.

Glenn was buried at Arlington Cemetery in Drexel Hill, PA with military honors on December 29th.  Afternoon services were at St. Matthews Lutheran Church not far from Glenn’s home in Glenmore, PA. Near the end of the service, a quintet of Lancraft members played his favorite marching tune, followed by the medley, Irish Coffee, Lancraft’s traditional muster exit tune.

This remembrance was provided to The Company of Fifers & Drummers shortly after Glenn's passing. Through an error on our part it was not published in a timely fashion - We sincerely apologize for the lateness of this remembrance.