Leo J. Brennan, 83, of Madison, CT passed peacefully away on January 9, 2018, surrounded by his loving family. 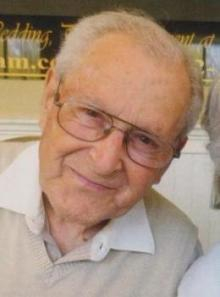 Leo was born August 28, 1934 and is survived by his wife of 61 years, Shirley Brennan; daughter Laurie Brennan and her partner Constance Calderaro of Barkhamstead, CT; son Timothy Brennan and his wife Jennifer of Westerly, RI and four grandchildren; Grace, Miles, Nora and Will Brennan. He was predeceased by son Leo J. Brennan III.

Leo was a lifelong employee of and retired in 1996 from Stanley Bostich Company of Clinton, CT. He was a historian of the American Revolutionary War period and dedicated most of his life to this passion.

Leo was an accomplished musician, veteran fifer and member of many Fife and Drum Corps units, including the Sailing Masters of 1812 of Essex, CT; Lancraft Fife & Drum Corps of North Haven, CT; and most recently of the Mattatuck Drum Band of Waterbury, CT. In his day over the decades he donned the uniform and tri corner hat and marched in many a parade and performed on many a muster field to celebrate our national heritage. He traveled far and wide with the Fife and Drum Corps, up and down the East Coast, across America, and even performed in Ireland and Switzerland. 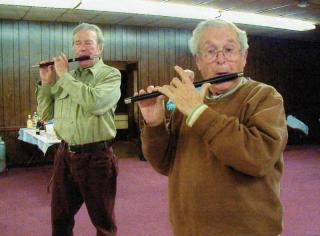 In addition to being a former member of the Company of Fifers & Drummers and the Madison Historical Society, Leo was a travelling Sutler, or seller of colonial goods, for over half a century. He was a familiar sight, dressed in colonial uniform and encamped with his wares, at all the muster fields and battle re enactment sites. Every Drum Corps or Militia unit member knew if they needed something, from fifes to musket flints, Leo would have it.

Leo was an avid reader and collected a large library of books about the American Revolutionary War and the War of 1812. He was a familiar sight browsing shelves at the Book Barn and other local bookstores and a regular patron of the Madison Library, never missing his weekly trip to read the antiques publications. He enjoyed the company of the gang of regulars each morning at the Madison Coffee Shop and was a daily customer for years. At home he loved to follow the Boston Red Sox, the New England Patriots, and UCONN Husky basketball, particularly the women's program. 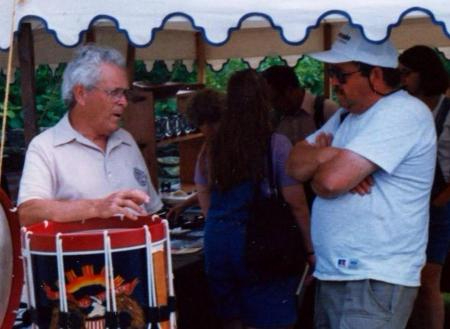 Perspective from the Midwest 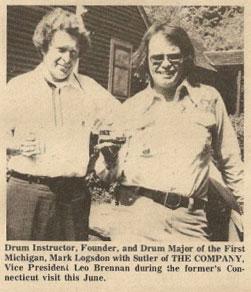 Leo Brennan was one of the early supporters of the 1st Michigan Colonial fife and Drum Corps. The Corps founders were making calls to Leo on a regular basis for information regarding Corps supplies and music sources, such as the Company books (1 and 2, at that time). The calls became so frequent that Leo made a trip out to Sterling Heights from Connecticut, in the summer of 1976. At the time, he was both Company Vice President and ran the Company Store. The members of the 1st Michigan were so thirsty for fife and drum information that Leo was able to pay for the trip through the sales made over a Saturday and Sunday.

While at the home of the 1st Michigan founders, many discussions were had about the premier outdoor event of the time, "The Feast of the Hunter's Moon", held in Lafayette, Indiana. He set up a booth at the Feast in the fall of 1978 and returned to Connecticut with a new understanding of Midwest Fifing and Drumming. While at the home of Mark and Mary Logsdon, Leo was also very upbeat about the Company of Fifers & Drummers, and the good that the fraternal organization was doing in promoting the art form. Over the decades that followed, Leo's affability and continued interest in Fife and Drum happenings outside the Connecticut Valley was expressed in letters and telephone calls.

Leo also had a personal interest in the cataloging of known Brown Drums, helping to track down existing drums and obtaining measurements, serial numbers and the stories behind each of the instruments.

The Company of Fifers & Drummers is what it is today thanks to the efforts and tireless support that those early visionaries like Leo Brennan. He was an Ancient.