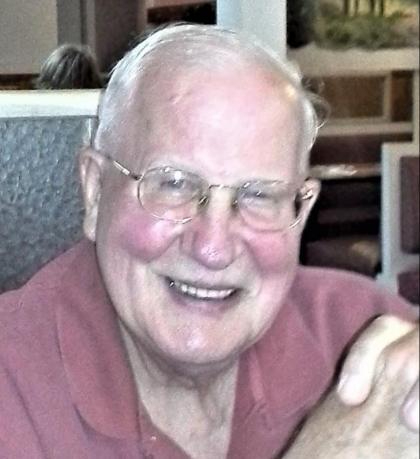 Randy was born in New Britain, January 23, 1935, a son of the late Lyman D. Stack and Frances (Karatey) Stack and had been a Wallingford resident for many years.

A proud U.S. Navy veteran of the Korean War, Randy served aboard the USS Cromwell DE-1014. He was a graduate of the Teacher's College of CT. and was employed by the Wallingford Board of Education for 35 years as a U.S. History teacher at Moran Middle School.

After retirement, Randy was employed by Triple Springs Water Co. in Meriden.

He was an active member of Center Congregational Church in Meriden, where he served as a Deacon, Trustee, and volunteered his time with various building projects.

He organized numerous parades in New England, the Wallingford Tercentennial; and a co-organizer of Jubilee 325. Randy was the chairman of the Meriden US Bicentennial Commission, and enjoyed his involvement with the Bicentennial Wagon Train.

He was a member of the Meriden Jaycees, VFW Post 591 and American Legion Post 187 of Wallingford. Randy was a life member of The Company of Fifers and Drummers.

He also enjoyed teaching "Fun with History" at both the Wallingford Senior Center and Ashlar Village.

His family truly meant the most to him; his loving wife Colleen; his three sons, Stuart Stack and his wife Susan (Riefenstahl) of Meriden, David Stack and his wife Cheryl (Lahey) of Concord, NH, Christopher Stack and his fiancée Paula Fernald of Chester; his grandchildren Sarah, Marguerite, Johnathan, Meghan, Dana and Mitchell Stack; his sister Judith Stack Ronewicz of Plainville.

He was predeceased by his nephew and niece Steven and Elizabeth Sala.

Special thanks to neighbors Mike and Chris Kulesza.

His family will receive relatives and friends at Center Congregational Church, 474 Broad St., Meriden, Saturday, July 10, 2021, from 9 a.m. until 11 a.m. A memorial service and celebration of Randy's life will be held at 11:30 a.m., including U.S. Navy Military Honors.

In lieu of flowers, gifts in memory of Randall may be made to Center Congregational Church.

Arrangements are under the direction of The Meriden Memorial Funeral Home, 450 Broad St.