Thomas A. Brym, longtime member of The Company of Fifers & Drummers, passed away after a 3.5-year battle with lung cancer. 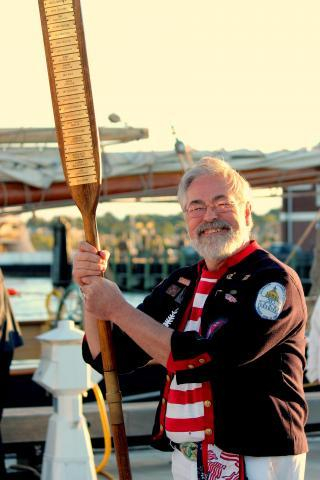 Tom Brym and the Oar (photo credit, Karen Riley)Tom was born in New Haven on March 4, 1955, son of the late Alfred and Wanita (Cushing) Brym, husband of Debbi (Solomon) Brym, father of Zachary (Maria) Brym and Francine (Antonin) Lapiche; Dzaidzi to four grandchildren. He worked for Yale New Haven Hospital at the Saint Raphael Campus for over 30 years as a Cardiovascular Radiologic Technologist.

Tom joined the Ancient Mariners in 1982 as a member of the boarding party and chanteymen. He took his turn as pirate and then found his calling as the chaser, perhaps most memorable for his bullwhip. As a chanteyman, he contributed to recordings of “Turnin’ the Tide” and “Crossin’ the Line”. He performed at the Mystic Sea Music Festival and traveled both nationally and internationally with the Mariner Chanteymen. Preparation for those events included weekly rehearsals commonly hosted in the basement of the Company Hall, around which he contributed to both the demolition and renovation of the Hall. 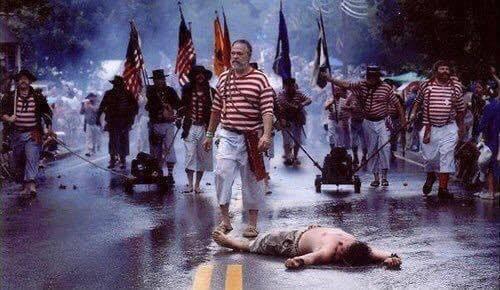 Due to the current State of CT Guidelines, services were held privately. Donations in his memory are being collection for the Company Junior Camp at https://companyoffifeanddrum.org/about/donations/junior-camp-fund. On the donation form, please, select “I would like this donation to be made in honor of someone”, then “in memory of” and enter “Thomas Brym” as the “Honoree’s Name”. 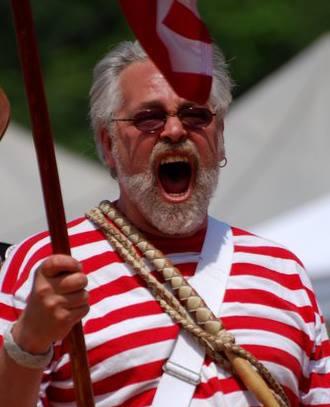