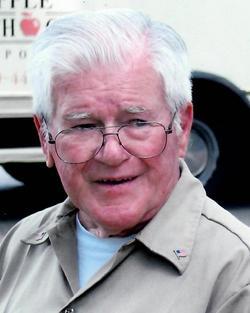 He was born in Meriden, April 14, 1923, a son of the late Wallace A. and Gladys (Meigs) Fulton and was a graduate of Meriden H.S.  Mr. Fulton was a U.S. Army Veteran of World War II.  He was employed by American Refractories and Crucible Corp. until his retirement.  He was active with Fife and Drum Corps for 70 years and a longtime member of the Ancient Mariners Drum Corps. He was a member of the Antique Veteran Honor Guard and in earlier years and was an avid camper and kayaker. Mr. Fulton was a fan of UCONN Women’s Basketball.

He is survived by his daughters, Nancy Fulton, and Cynthia Giordano and her husband Kenneth, all of Wallingford; his grandchildren, Melissa Pelton and her husband Ryan, and Matthew Madley, all of Wallingford; his great grandchildren Dylan and Caitlin Pelton;  his sister, Carol (Mrs. Robert) Smith of Florida; his brother and sister-in-law, Don and Lois Fulton of Texas; and his sister-in-law, Betty (Mrs. Rodman) Fulton of Wallingford and several nieces and nephews. He was predeceased by his son-in-law Anthony Colette.